How To Store Whiskey 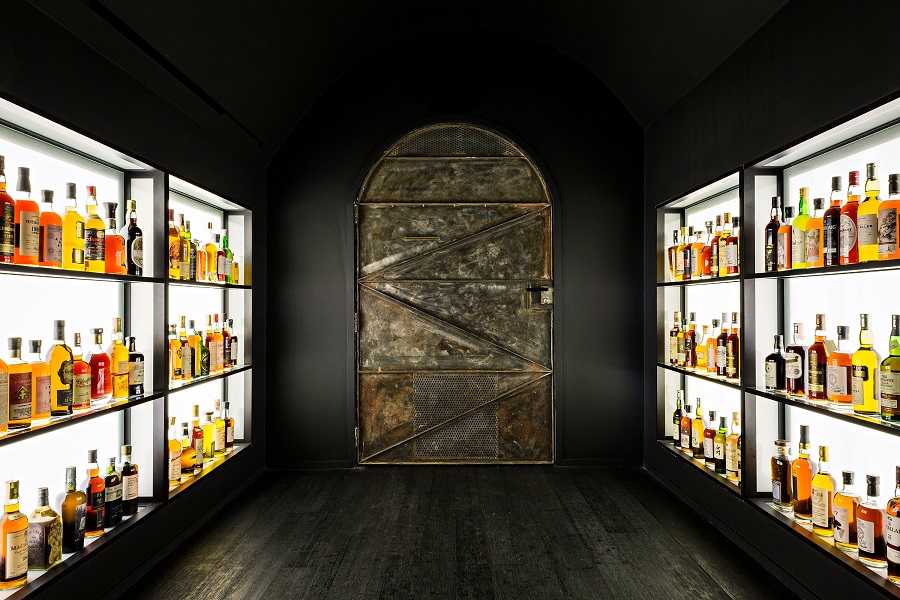 If you are a whiskey lover, chances are you are adamant about preserving it well!

Whether the bottle is opened or closed, good whiskey needs to be kept away from sunlight and heat. An ideal place to store it is either a cellar or a cabinet.

Cool and dry areas are suitable for holding the whiskey intact for an extended period.

Is whiskey photo and temperature-sensitive?

Light and fluctuating temperatures are two of the worst enemies of whiskey.

It can thoroughly damage the taste, color, and odor of the alcohol. Not to mention the label, cork, and the box, which will also wear out due to careless storing practices.

One of the main reasons whiskey loses its taste and color is oxidization. It is a process where oxygen starts to combine with the chemical compounds in the whiskey and thus starts affecting its flavor. The whiskey then starts to lose its flavor, and the spirit begins to destabilize.

Even though the taste of the whiskey will fade, the ABV, i.e., alcohol by volume content, will remain the same. Anyone who loves their whiskey knows that the true essence lies in its flavor.

A stable temperature is another crucial factor. Fluctuating temperatures cause the whiskey to expand, which damages the cork. Unlike wine bottles, the cork of a whiskey bottle cannot touch the whiskey.

Since the alcohol content in whiskey is high, it starts disintegrating the cork. A damaged cork allows oxygen to enter the bottle, thus catalyzing the oxidization process. The cork cannot be kept dry all the time.

You will need to make it most from time to time. You can do this by tilting the bottle for a few hours, three to four times a year. This way, the cork remains moist but not so wet that it gets damaged.

Direct exposure to light, both natural and artificial, cause the color and flavor to fade over time. These drastic effects can start showing within four to eight weeks of exposure.

The label also begins to fade due to light; this can considerably reduce the charm of a gorgeous whiskey bottle. Flavor, color, and presentation are three critical components of a well-preserved whiskey.

Humidity is another factor that needs to be taken into consideration. It does not directly affect the quality of the whiskey, but it does considerable harm to the label. It also destroys the packaging, thus making the bottle fragile.

Any whiskey collector will know how disheartening that is. If a person wishes to auction off a well-preserved bottle, packaging will be of utmost importance.

The best example is a guy whose dad gave him an expensive bottle of whiskey for his birthday every year till he was 18. Even though he wasn’t of the legal age to drink it, he decided to maintain it well.

And on his 18th birthday, he was then able to sell these well-preserved bottles and put down a down payment for an actual house. That’s the kind of stuff well-preserved whiskey can pay for.

Storing an unopened bottle of whiskey 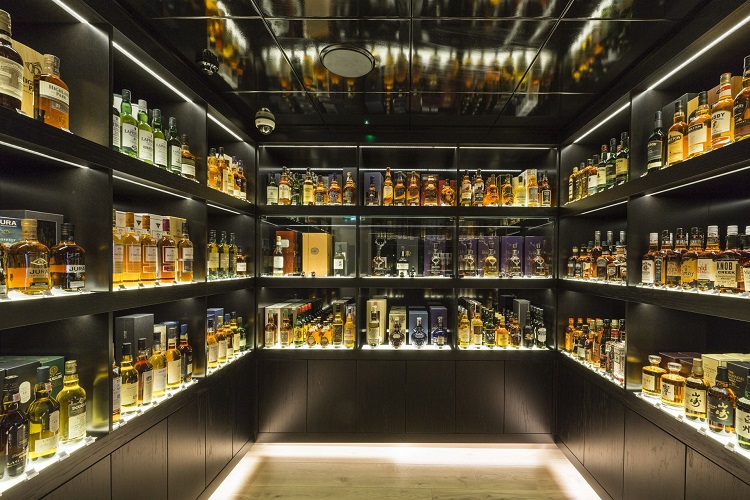 An unopened bottle of whiskey is way easier to store than an opened bottle. Unlike wine, whiskey does not mature with age.

The UV rays damage the color pigments of the whiskey. Make sure the temperature is lower than the room temperature. Whiskey evaporates faster at high temperatures.

Anywhere between 15-20 degrees Celsius is considered ideal for storing whiskey. The cellar or cabinet should not be damp or moist.

Humidity causes mold to grow on the bottle and eventually wear out the cork. Thus adversely affects the value of the bottle. You can cover the bottle with a clean plastic-free from chemicals.

Plasticizers can adversely affect the sleeve or even seep in through the cork, making sure the plastic is chemical-free. If you own bottles with screw caps, make sure to tighten them regularly. It might loosen up over time and lessen the quantity of the whiskey.

Make sure your bottles are stored upright. A tilted bottle will dampen the cork. It will cause the cork to disintegrate over some time, pieces of which will fall into the whiskey and allow oxygen to enter the bottle.

The whiskey will get evaporated, causing the quantity to reduce drastically. The best way to maintain the quality of a cork is to tilt the bottle a few times a year. This way, you keep an eye on the whiskey and make sure the cork is damp.

When you open a bottle, make sure to pull the cork gently. If a bottle is stored for a long time, it must be opened with caution. A sudden jerk can cause the cork to crumble into the bottle or in your hand. It may sound silly, but it is a mistake made more often than you think.

Wrapping the bottle in a plastic paraffin film is another practice that might be helpful. Although rare, this practice can keep the content of your bottle intact.

Getting an insurance policy is another way to make sure your bottles are safe. Since well-preserved whiskey bottles go for a high price, several agencies offer insurance for them. Presenting the bottles with utmost care will also enhance the beauty of your cellar.

Storing an opened bottle of whiskey 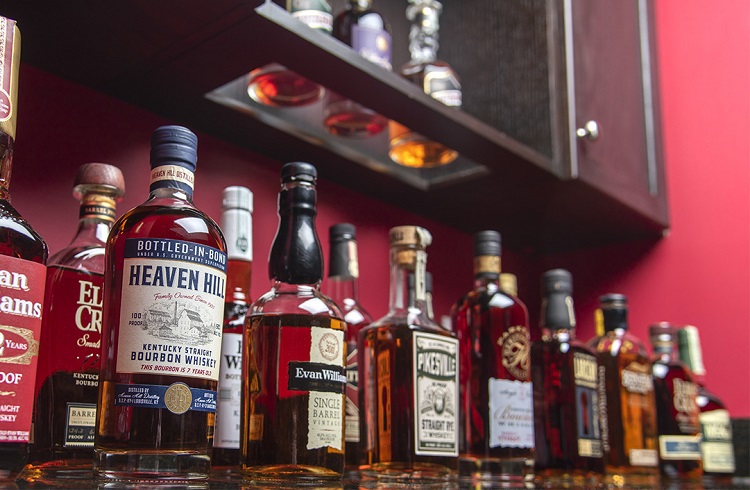 No matter how much you love preserving your whiskey, you eventually have to open it. Be it for a party, anniversary, or an even better occasion.

Enjoying a good quality bottle is never a problem, but preserving one is. When you open a bottle of whiskey, it is always better to finish it off as soon as possible. Once the bottle is uncorked, oxygen seeps into it.

A half-filled bottle of whiskey can be preserved for up to a year; after that, oxidization begins. To save your half-drunk bottle from oxidization, you must put the whiskey in smaller bottles with tight corks. Less space in the bottle means less oxygen. This technique will go a long way in preserving an opened bottle.

Decanters might seem ideal, but they do not maintain it as well as a corked bottle. So make sure you do not use loosely clasped bottles. Even though it may not seem as fancy as the original bottle, these small bottles are your best hope of saving that precious whiskey. Just like an unopened bottle, this too must be stored in a cool and dry place.

Direct exposure to light must be avoided at all costs. Ensure you do not keep the bottle near a window or on an open shelf. The space left in the bottle is directly proportional to the amount of oxygen in the bottle.

And as we know, a high amount of oxygen reacts with the chemical compounds of whiskey. Flavor and color, two of the most critical aspects of the whiskey, are lost.

If none of the above methods of preservation work for you, the only way left is to drink it all up. That’s right! Call all your friends and throw a grand party! Make sure you enjoy the flavor before it completely fades. 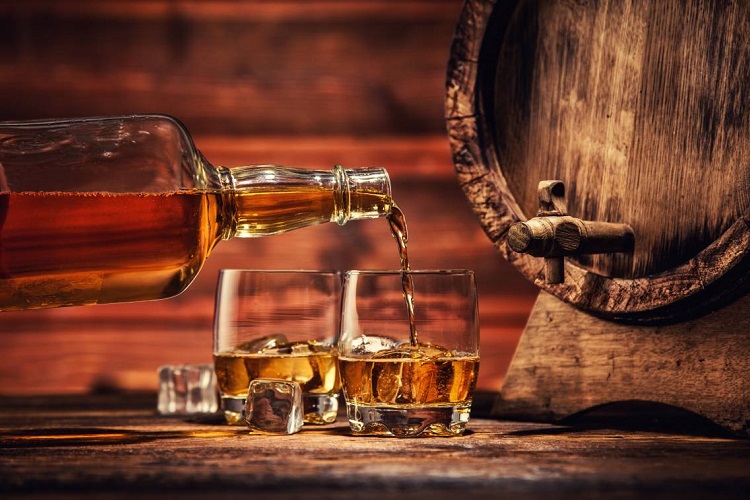 Two aspects of a bottle need to be preserved – one is the whiskey, and the second is the aesthetics.

A collector will look at both these aspects before paying big bucks. To protect the bottle’s contents, you must store it in a dark and dry place. Make sure the temperature is between 15-20 degrees Celcius. The bottle should be stored upright so that the cork is dry.

High alcohol content can damage the cork and cause oxygen to seep into the bottle. It will plague the whiskey with the oxidization process, making it lose its flavor and color.

Saving your whiskey from oxygen is the most important aspect of storing a bottle, whether opened or unopened. A damp cork will slowly start to break, pieces of which will fall into the whiskey and will completely ruin the flavor.

There should be enough space between the cork and the whiskey, as fluctuating temperatures can cause the liquid to expand. Exposing the whiskey to direct sunlight must be avoided at all costs as it causes the color and taste of the whiskey to wear out quickly.

Although the whiskey is a crucial factor to consider, a keen collector will also expect the bottle to be in mint condition. The label, packaging, and box must be as well-maintained as the whiskey itself.

They together enhance the aesthetics of a bottle, making it a complete package.

Whiskey cannot be aged after being bought from the store, so remember it has to be corked up well at home!

Don’t worry if you don’t have a sophisticated cellar. If you follow the instructions carefully, you can create an environment conducive to one.

And yes, storing it well is essential, but don’t forget to cherish the smooth scotch with your close ones. A good whiskey always tastes better with people you love!