Bourbon and Whiskey – What’s The Difference 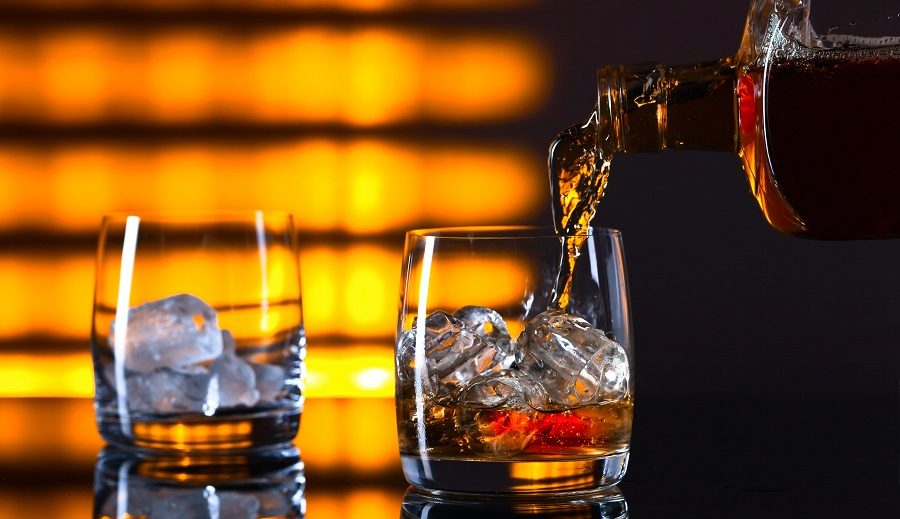 What is the difference between bourbon and whiskey?

That has been an age-old question that people still wonder about to this day.

A lot of confusion arises around the question since bourbon is a type of whiskey. If bourbon is in the same family, how is it different?

If you are one of the many people wanting an answer to this popular question, you have come to the right place.

This guide will first explain what whiskey and bourbon are. We will then dive into the basic guidelines of how the distilleries make the liquor and the difference between them.

Even if you know the difference between the two, you still may not be sure what one you should drink.

We will also cover what bourbon tastes like, what the different whiskies taste like, and who will best suit the drinks.

You no longer have to be confused when the bartender asks for your order.

By the end of this guide, you will know what you want to try next. Let’s get started. 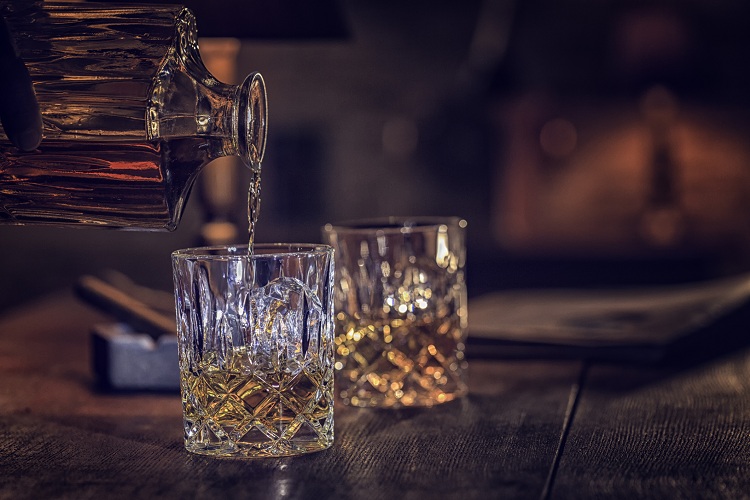 To answer the question of what the difference is between whiskey and bourbon, we need to first dive deep into each.

Whiskey is a type of distilled alcohol made from fermented grain. True whiskey has no added flavors and is aged in a wooden barrel.

All of the flavors will come from whatever wooden barrel that the whiskey is processed in.

A few factors will determine what kind of whiskey it is: location, the kind of grain used to distill the beverage, and the wood barrel the whiskey is aged in.

Furthermore, each whiskey has a mash (the mixture of grains used to produce the whiskey).

A mash bill is the report of the different kinds of grains used in the distilling process. All whiskies have a certain requirement of what can be in the mash. For instance, scotch whiskey uses malted barley.

All whiskies commonly come from barley, corn, rye, and wheat.

However, a drink can still be called a whiskey and have ingredients such as millet, oats, and quinoa added to them.

Each bottle of whiskey will also be a certain proof. The proof is how strong the alcohol is and refers to the volume of alcohol within the bottle, which producers also record as ‘ABV’ (alcohol by volume).

Most common whiskies at the lower end of the price range will be 40% ABV. Forty percent ABV is also a minimum for many kinds of whiskey, such as Scotch.

Finally, there are several different types of whiskey. Let’s take a look at the main kinds.

These are all different products in the whiskey family. As mentioned before, each whiskey has a different grain mash, is aged in different types of barrels, and comes from a specific location.

For instance, Irish whiskey is made in Ireland, distilled with barley, and has to age for at least three years. 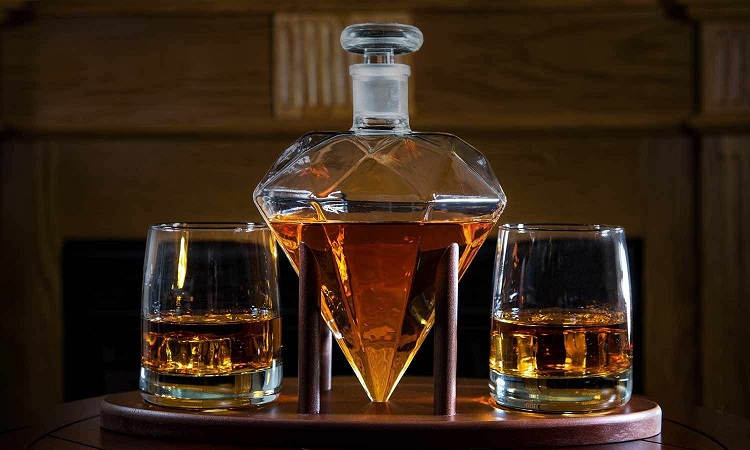 Bourbon is a type of American whiskey. However, the liquor has many technical requirements that producers must fill for it to be classified as bourbon.

The spirit has a lot more guidelines than whiskey does, and the process is more restrictive. The Federal Standards of Identity has several rules for the production of the liquor.

For manufacturers to classify a whiskey as bourbon, it needs to be distilled from 51% corn.

It also has to be processed in the United States. Furthermore, bourbon has to be aged in a new charred oak barrel and cannot have any additives. 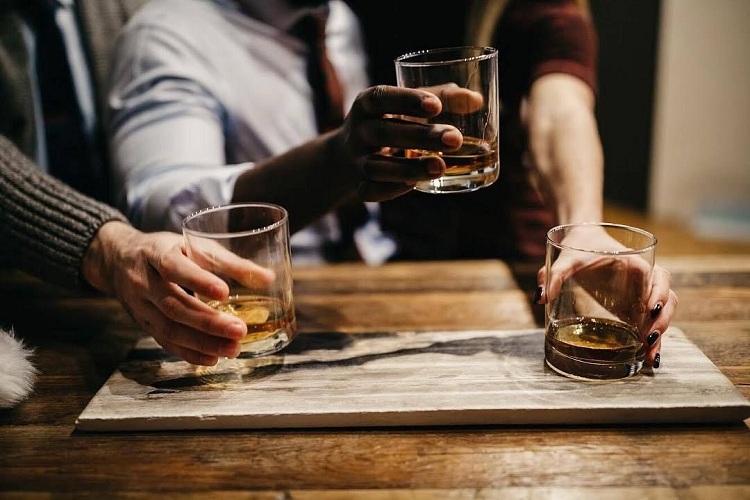 Now that we know what each alcohol is, we can finally answer what the difference is between bourbon and whiskey.

There are a few similarities and differences between the two liquors.

Bourbon is in the whiskey family, so there will inevitably be some characteristics that will carry over with the two products.

However, since bourbon has more extensive technical requirements, some prominent features distinguish one from the other.

Which One Should I Drink? 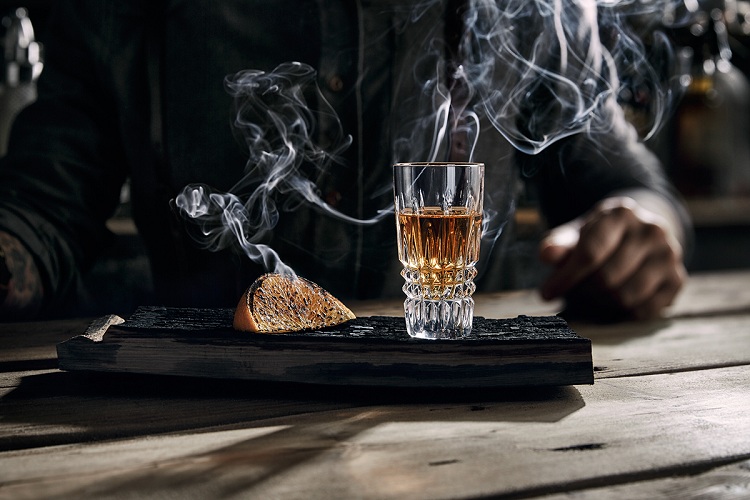 When you wonder what is the difference between bourbon and whiskey, you may also want to know what one you should be drinking.

The first thing to note is that when you are drinking bourbon, you are still drinking whiskey.

However, when you drink whiskey, you are not necessarily drinking bourbon.

There are five main kinds of whiskey, as listed above. Irish whiskey is smooth but is less sweet than bourbon.

American whiskey usually has vanilla and caramel notes with a bit of smokiness. Canadian whiskey is easy to drink and is light and sweet. Scotch whiskey can vary depending on the location.

Some will taste smokey while others will be sweet and smooth. Finally, Japanese whiskey has a balance of many different flavors and is bold.

Bourbon is famous for its smoothness and sweet flavor.

Since the liquor ages in a charred oak barrel, bourbons will have much stronger vanilla notes.

When alcohol is smooth, it means that there will be no or little burn. These characteristics are why bourbon will be great for beginner whiskey drinkers.

Some whiskies will feel as if it is burning your throat as it goes down – bourbon will not be near as bad. Furthermore, bourbon will be sweeter than other harsh whiskies.

You can use it as a stepping stone, so to speak, to slowly become more accustomed to strong liquors.

If you want to get into whiskey, we highly recommend trying bourbon first. It is one of the smoothest and sweetest relatives of whiskey.

Even so, a hard-core whiskey enthusiast will also enjoy a glass of bourbon now and then.

Consider trying Wild Turkey 101 bourbon if you are new to the game. This spirit has an array of flavors, including vanilla and sweet toffee.

Many people ask, “what is the difference between bourbon and whiskey?”

Bourbon is in the family of whiskey and has its own unique taste.

The main differences between whiskey and bourbon are that bourbon must process and develop in a new charred oak barrel, contain 51% corn, be produced in the United States, and cannot be more than 80 ABV.

On the other hand, both whiskey and bourbon can age in oak barrels (usually), and neither contains any additives. Additives can be added colors or flavors.

All of the flavors must come from the barrel for manufacturers to classify them as whiskey and bourbon.

If you are new to the whiskey club, we recommend trying out bourbon first.

The reason being is that bourbon has a much smoother and sweeter taste than many whiskies out there. It will be the first easy step into the wonderful world of whiskies.